When you watch a film, the visual is already painted out for you. The set is built around an actual location and the actors show you what the characters look like. It’s much easier to get an idea of the story when you can physically see what is going on. With a book, however, in order to become engulfed in the storyline, the author has to work a little harder. They must provide detailed descriptions that help you picture the characters and resonate with the story.

Our relationship with our favourite books tends to become much more intimate. As we take on the author’s descriptions and transform them into personal images, our brains create personalisation’s of those characters. With often only a few words to go by, it can be interesting to see how our brain’s pair together certain personality traits and features. If you were to ask a person to draw a character from a book they’d never heard of without context, you’d expect to see an eclectic mix of images potentially resembling different people. They certainly wouldn’t be as consistent than if we were to have shown people a readymade picture of what an actor looks like.

Well that’s what we did. We decided to conduct an experiment to see what people would draw having heard only a single description. We chose not to tell people they’d be drawing book characters - aside from asking them to draw the person based on the description they heard, we provided them with no context at all. The character description we chose are from famous novels and are of famous characters, not that the volunteering artists knew that. We thought it would be interesting to opt for books that had already been made into films, so we could highlight the differences between what people pieced together from the book vs what the films show us the actors should look like.

You can see the outcomes below: - please note the people asked to take part are not artists or illustrators, which perhaps makes this experiment even more interesting.

“His grey-blue eyes looked calmly back with a hint of ironical inquiry and the short lock of black hair which would never stay in place slowly subsided to form a thick comma above his right eyebrow. With the thin vertical scar down his right cheek the general effect was faintly piratical."

You may be wondering why the volunteer chose to identify James Bond as a football player. The book described Bond as ‘athletic’ and in the mind of the person drawing, this meant the same as sporty. His brain pieced together those qualities to show a football player. 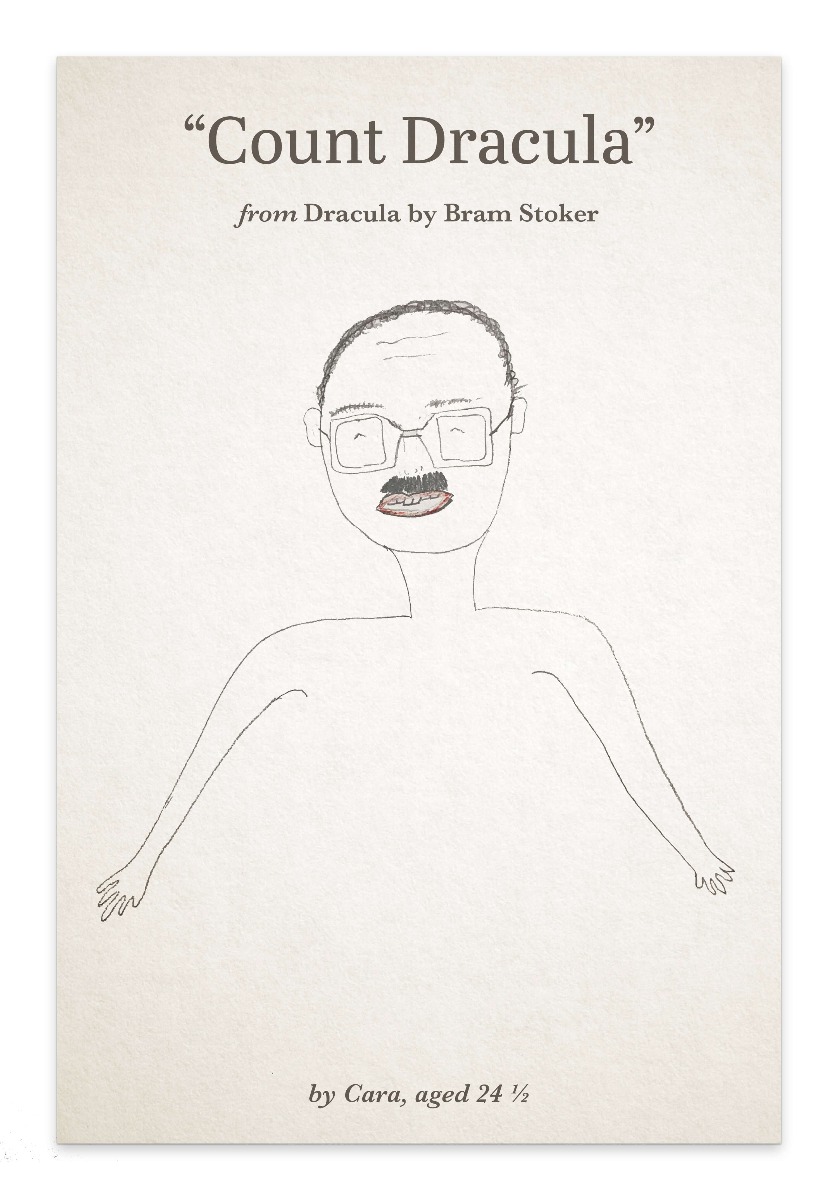 “Within, stood a tall old man, clean shaven save for a long white moustache, and clad in black from head to foot, without a single speck of colour about him anywhere….He moved impulsively forward, and holding out his hand grasped mine with a strength which made me wince, an effect which was not lessened by the fact that it seemed as cold as ice–more like the hand of a dead than a living man.”

… with high bridge of the thin nose and peculiarly arched nostrils, with lofty domed forehead, and hair growing scantily round the temples but profusely elsewhere.”

Despite the description mentioning a ‘long, white moustache’ the person chose to draw a short, black moustache. The lack of body and the addition of glasses were subjective of the individual drawing. It was interesting to see her version of this character as it’s quite different to what the films usually portray. 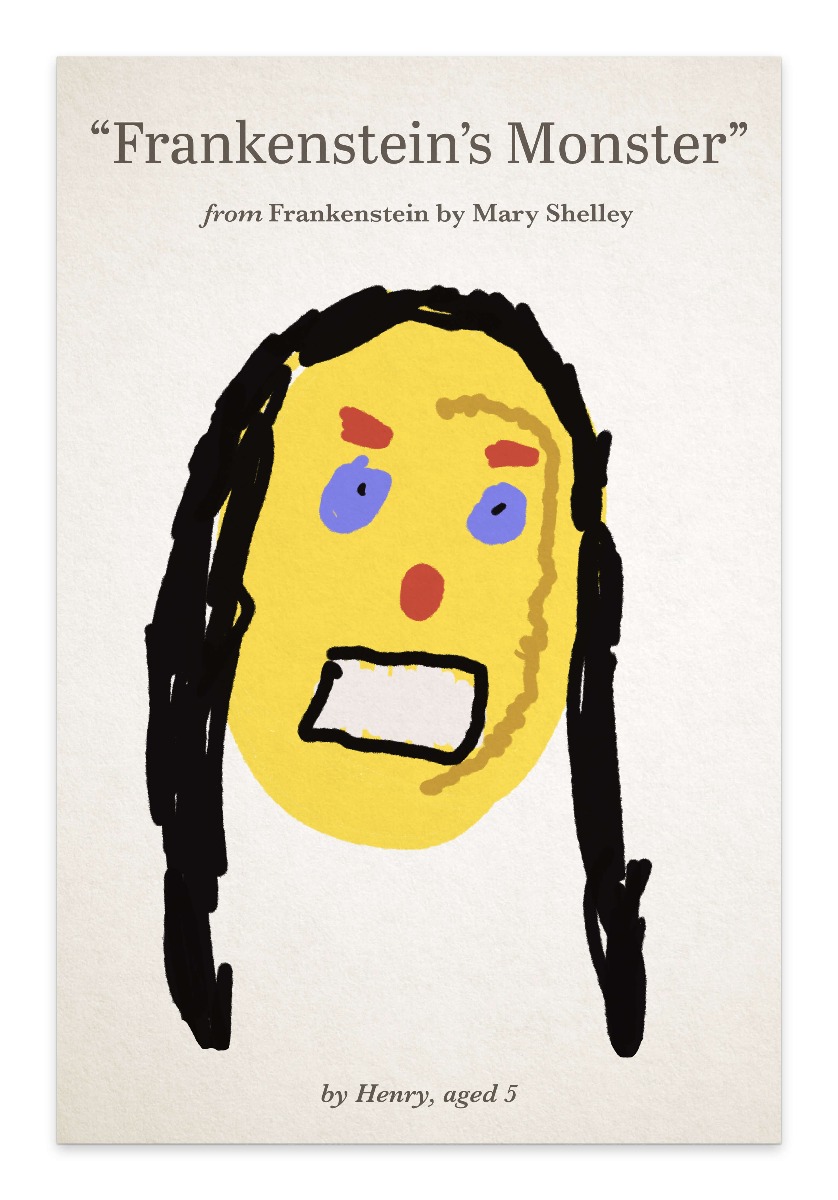 Frankenstein’s monster from "Frankenstein (The Modern Prometheus)" by Mary Shelley:

"Hideously ugly creation, with translucent yellowish skin pulled so taut over the body that it barely disguised the workings of the arteries and muscles underneath; watery, glowing eyes, flowing black hair, black lips, and the most perfect white teeth.”

We asked a broad range of ages to take part in this experiment and this is a child’s version of Frankenstein. The book describes the monster as having ‘black, flowing hair’ which is what we see here. It’s perhaps interesting that the film versions have predominantly shown this character to have short hair. 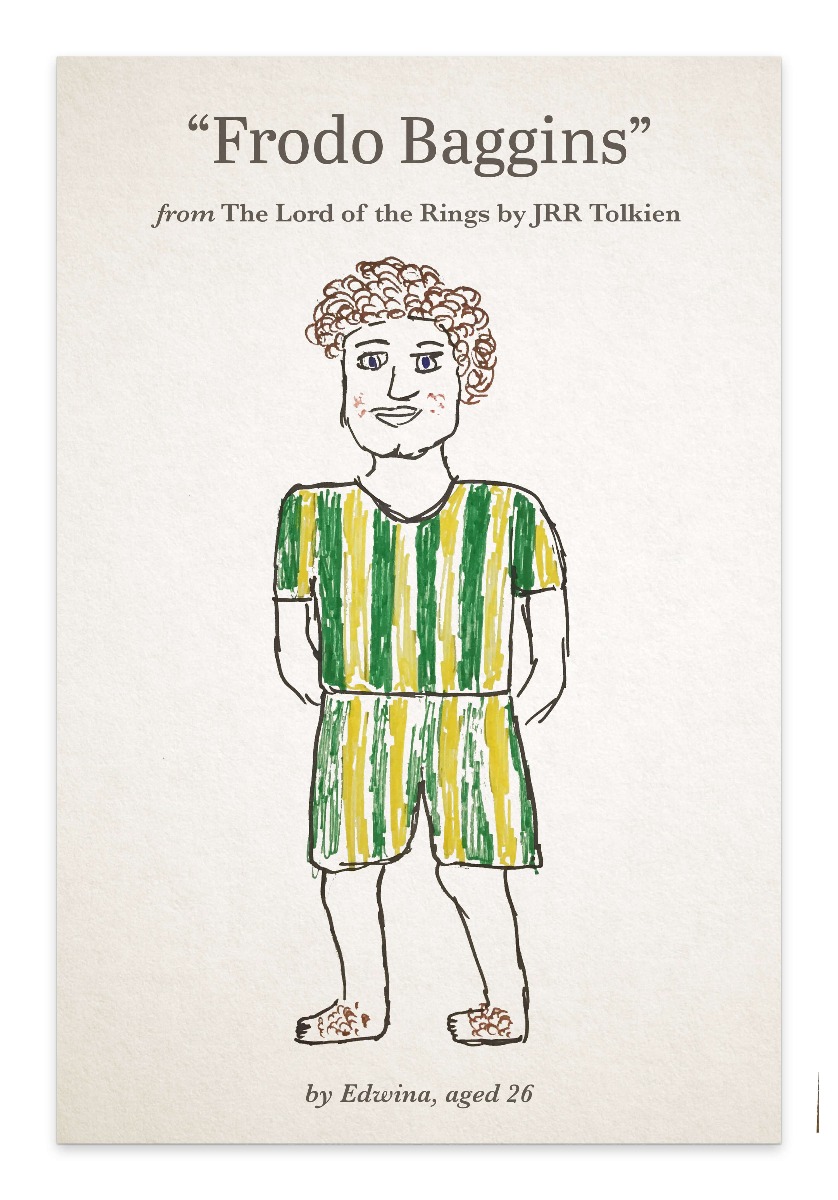 Frodo Baggins from “The Lord of The Rings” by JRR Tolkien:

“Stout fellow with red cheeks, taller than some and fairer than most, [with] a cleft in his chin: perky chap with a bright eye."

We have another football player. The green and yellow clothes from the description were indicative of a football kit according to this volunteer. It did leave her confused as to why they wouldn’t be wearing shoes however and why they had hair or their feet. The pre-emptive idea she had was challenged as more qualities were revealed and her drawing progressed, which is interesting as often a description in a book unveils as the story unfolds. 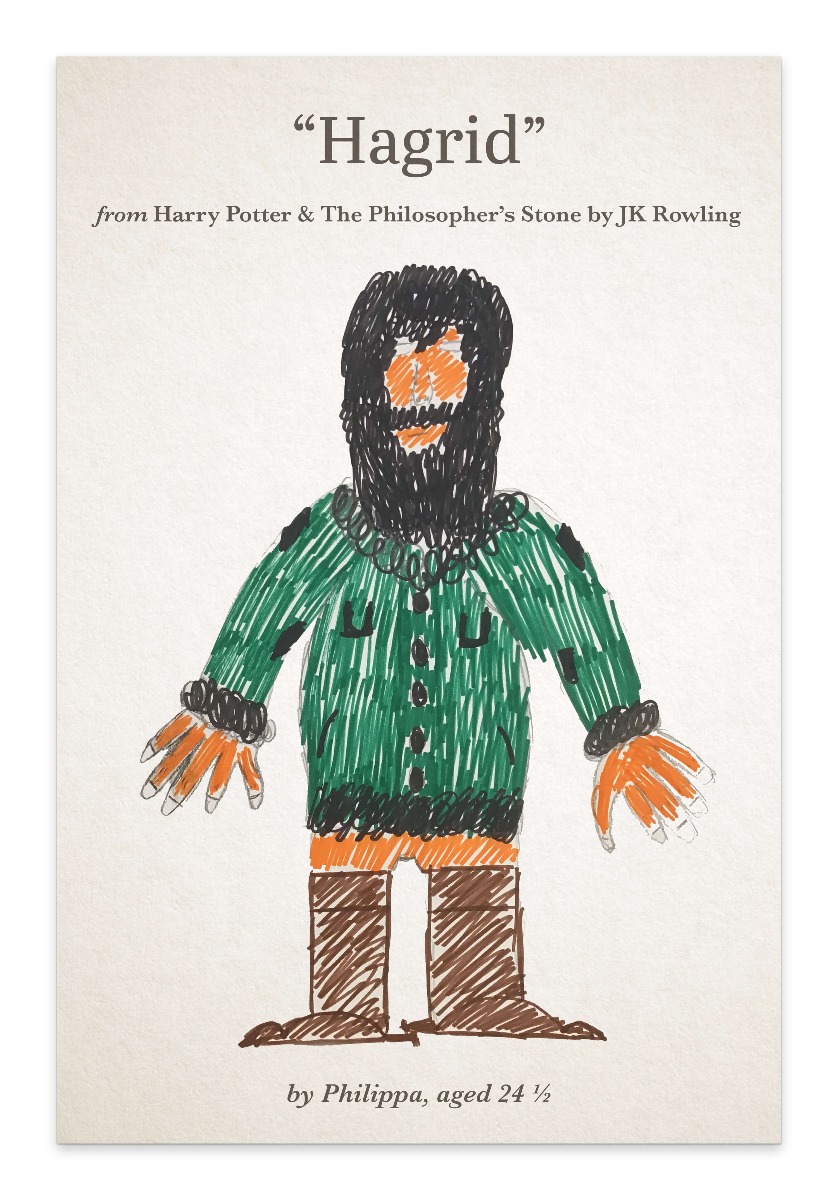 "He was twice as tall as a normal man and at least five times as wide. He looked simply too big to be allowed, and so wild — long tangles of bushy black hair and beard hid most of his face, he had hands the size of trash can lids, and his feet in their leather boots were like baby dolphins."

Hagrid’s drawing looks a lot like the film representation. JK Rowling is clear in her book description, however outlining quite a lot of his features in one go. 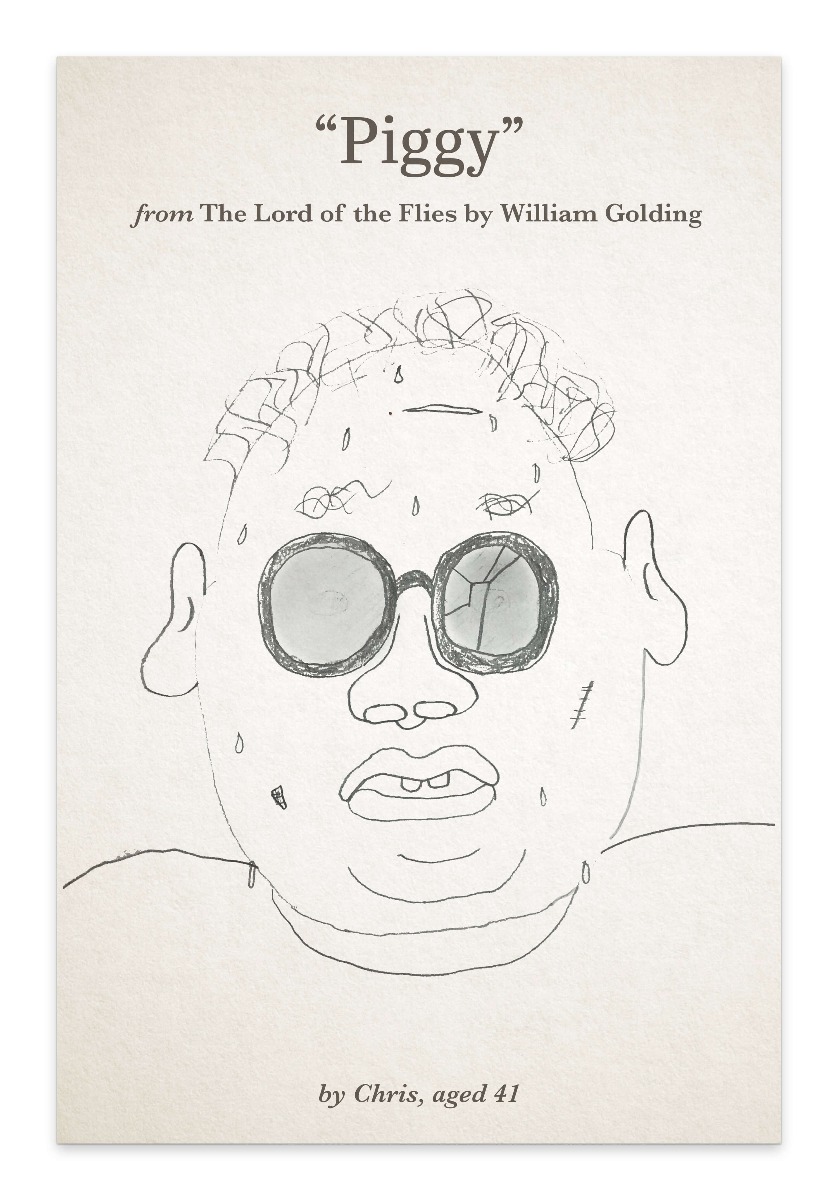 Piggy from "Lord of the Flies" by William Golding:

“'The naked crooks of his knees were plump, caught and scratched by thorns. He bent down, removed the thorns carefully, and turned around. He was shorter than the fair boy and very fat. He came forward, searching out safe lodgments for his feet, and then looked up through thick spectacles.”

An expression of pain and inward concentration altered the pale contours of his face. He smeared the sweat from his cheeks and quickly adjusted the spectacles on his nose.

His hair still lay in wisps over his head as though baldness were his natural state and this imperfect covering would soon go, like the velvet on a young stag’s antlers.”

Golding provides a very detailed description of the character, Piggy, and this picture isn’t too much unlike the actor’s image in the film. 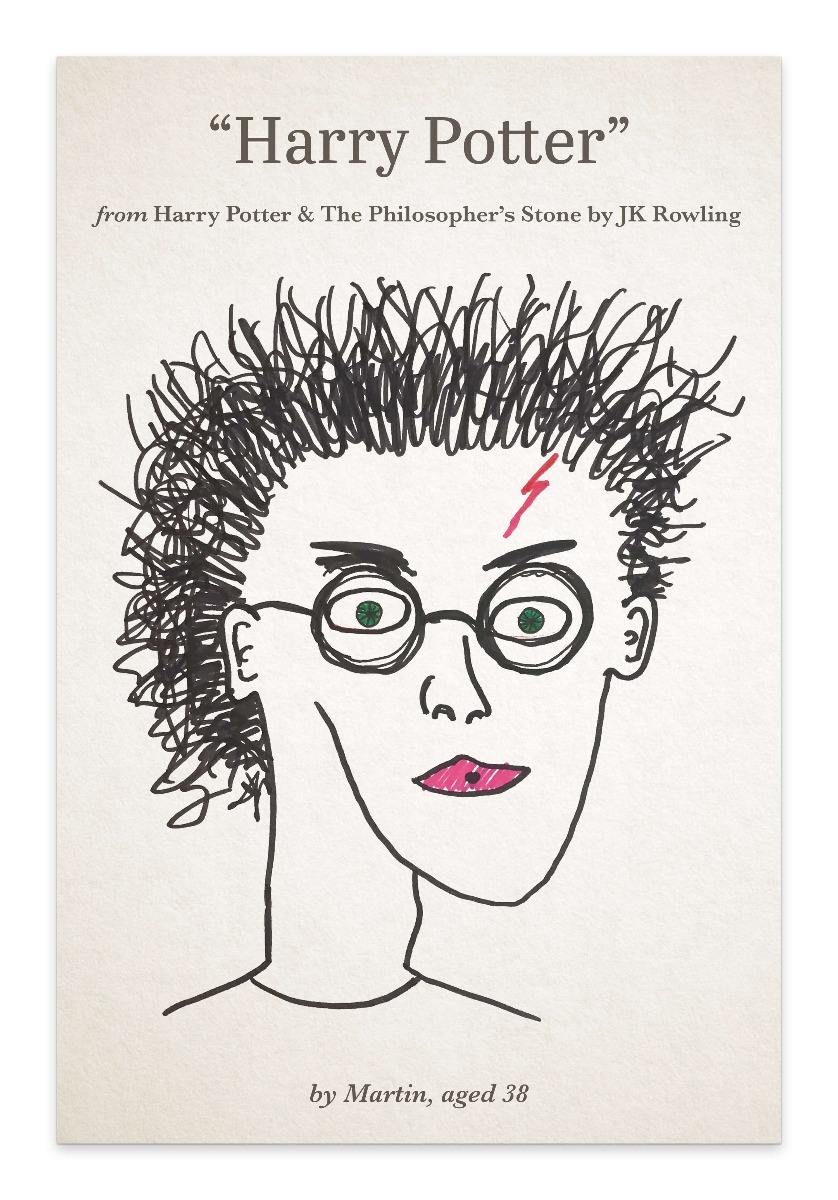 “Perhaps it had something to do with living in a dark cupboard, but he had always been small and skinny for his age. He looked even smaller and skinnier than he really was because all he had to wear were old clothes.

He wore round glasses held together with a lot of Sellotape because of all the times Dudley had punched him on the nose. The only thing he liked about his own appearance was a very thin scar on his forehead which was shaped like a bolt of lightning.”

Even if you’ve never read the book most people will know, if you mention a boy with glasses and a lightening scar on the forehead, you are referring to Harry Potter. We chose to tell the person drawing about the scar at the very last moment not to make it obvious.

“She was dressed in rich materials - satin and lace, and silks - all of white. Her shoes were white. And she had a long white veil dependent from her hair, and she had bridal flowers in her hair, but her hair was white. Some bright jewels sparkled on her neck and on her hands, and some other jewels lay sparkling on the table." 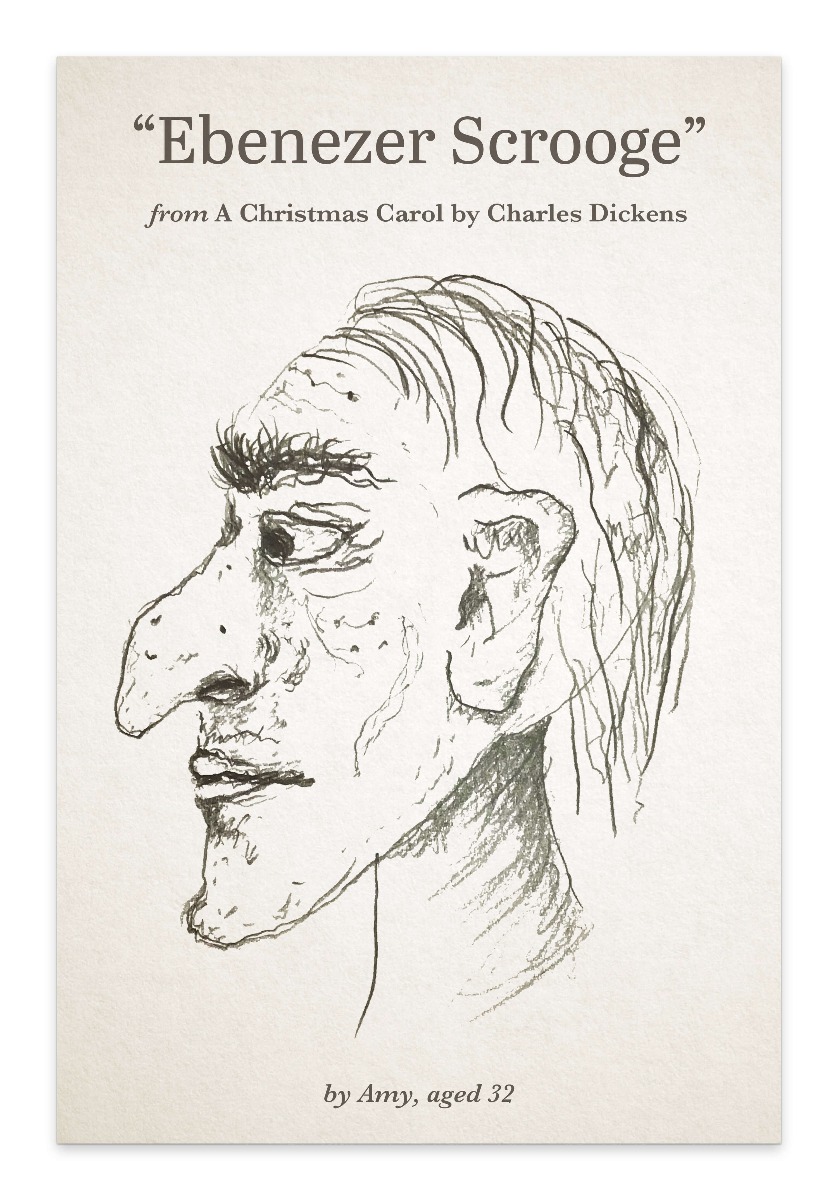 Ebenezer Scrooge from “A Christmas Carol” by Charles Dickens:

"The cold within him froze his old features, nipped his pointed nose, shrivelled his cheek, stiffened his gait; made his eyes red, his thin lips blue; and spoke out shrewdly in his grating voice. A frosty rime was on his head, and on his eyebrows, and his wiry chin. He carried his own low temperature always about with him.

There was an eager, greedy, restless motion in the eye, which showed the passion that had taken root, and where the shadow of the growing tree would fall.” 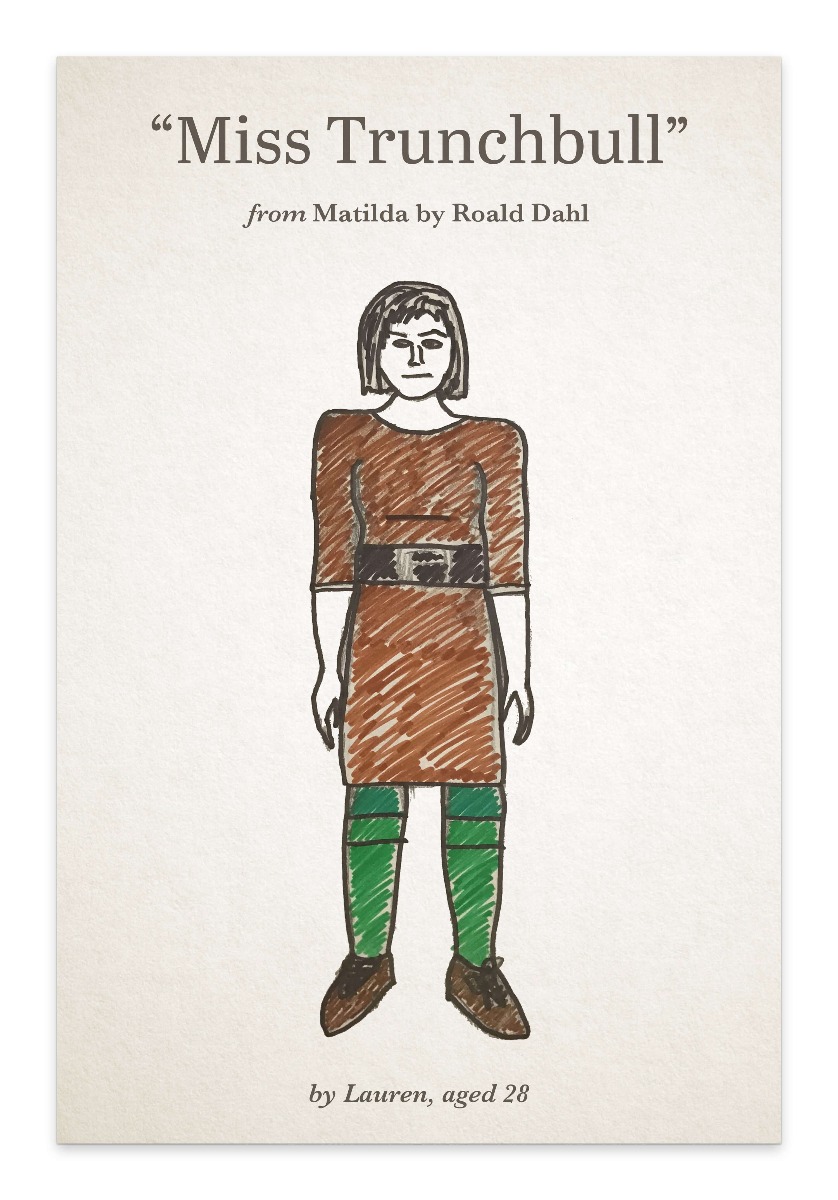 "She was a gigantic holy terror, a fierce tyrannical monster who frightened the life out of pupils and teachers alike. There was an aura of menace about her even at a distance, and when she came up close you could almost feel the dangerous heat radiating from her as from a red-hot rod of metal. When she marched- never walked, she always marched like a stormtrooper with long strides and arms aswinging"

When drawing Miss Trunchbull, the volunteer questioned how to draw arrogant eyes. Explicit characteristics outlined in a passage of text make it easier for the reader to decipher but passages like ‘Her face, I’m afraid, was neither a thing of beauty nor a joy for ever. She had an obstinate chin, a cruel mouth and small arrogant eyes. And as for her clothes…they were, to say the least extremely odd.’ leave the reader to their own interpretations. 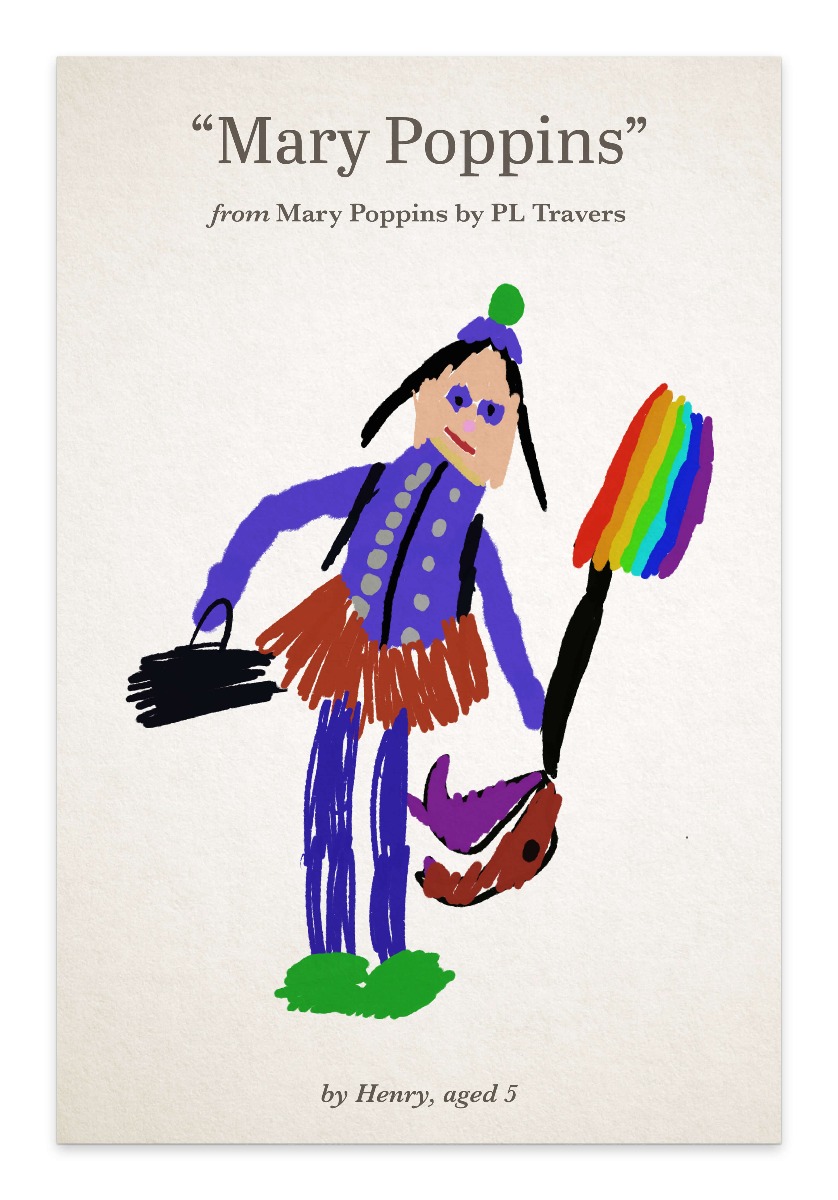 “Down below, just outside the front door, she stood, dressed in her coat and hat, with her carpet bag in one hand and her umbrella in the other.”

This was a child’s portrayal of Mary Poppins and while the person isn’t as defined, you can see a lot of the qualities we recognise from the film representation present. The child drawing this image pieced together the rain from the umbrella and said if the weather was wet, she would need a bobble hat. 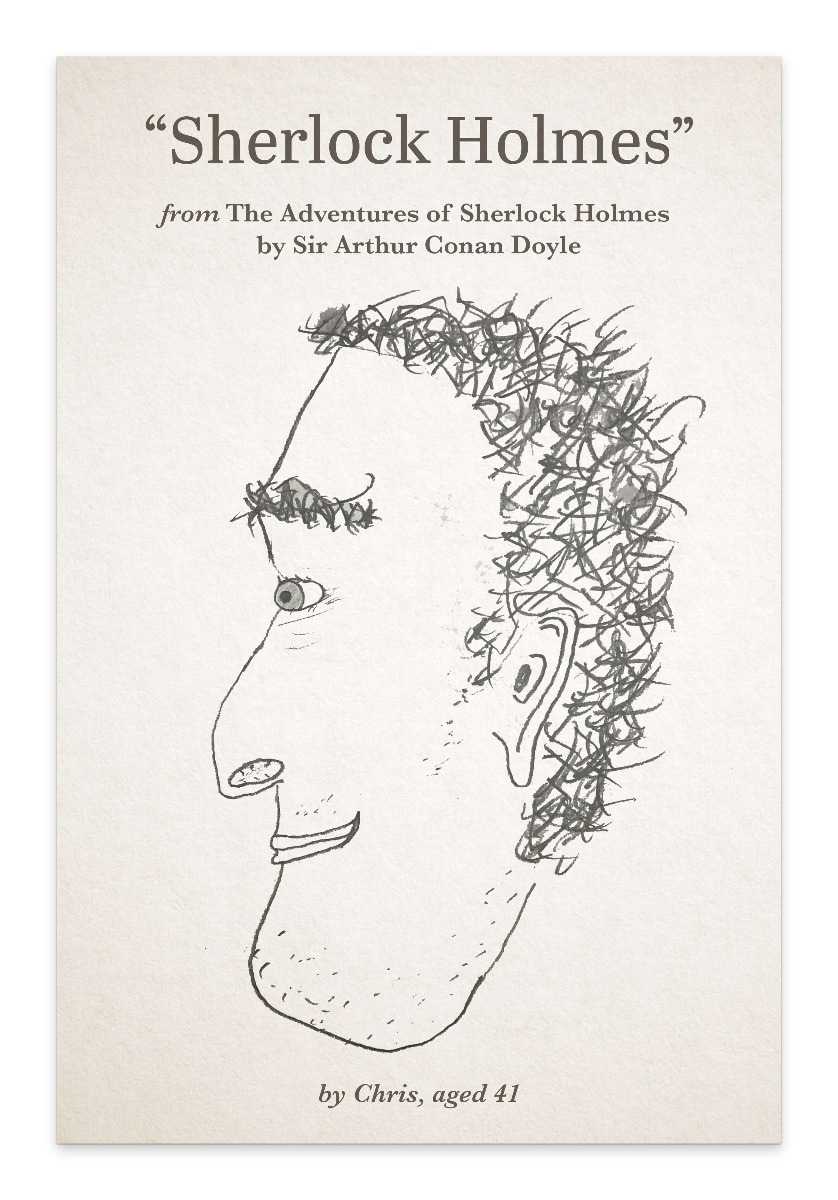 “In height he was rather over six feet, and so excessively lean that he seemed to be considerably taller. His eyes were sharp and piercing, save during those intervals of torpor to which I have alluded; and his thin, hawk-like nose gave his whole expression an air of alertness and decision. His chin, too, had the prominence and squareness which mark the man of determination.”

In a similar way to Miss Trunchbull, the volunteer questioned ‘how do you draw a mocking smile’. He also had various other questions that the description omitted. 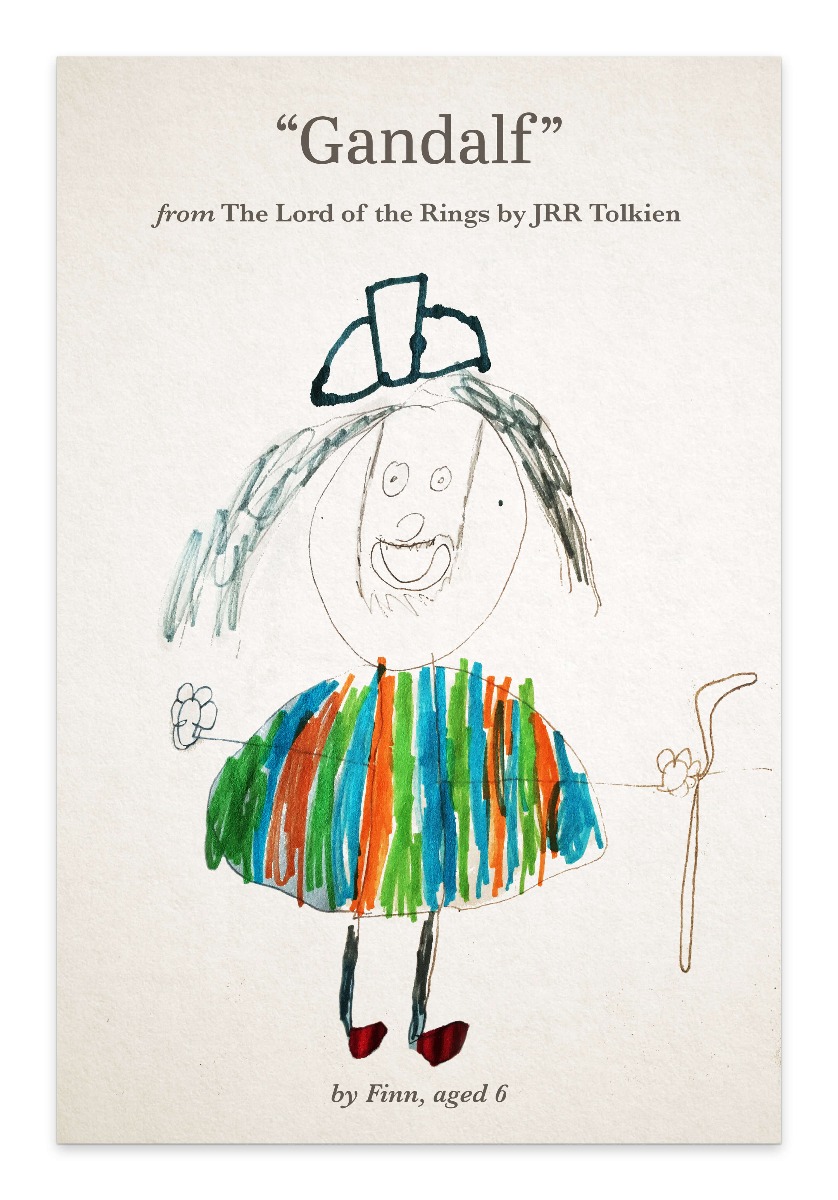 Gandalf from “The Lord of The Rings” by JRR Tolkien

"…an old man with a staff. He had a tall pointed blue hat, a long grey cloak, a silver scarf over which a white beard hung down below his waist, and immense black boots." 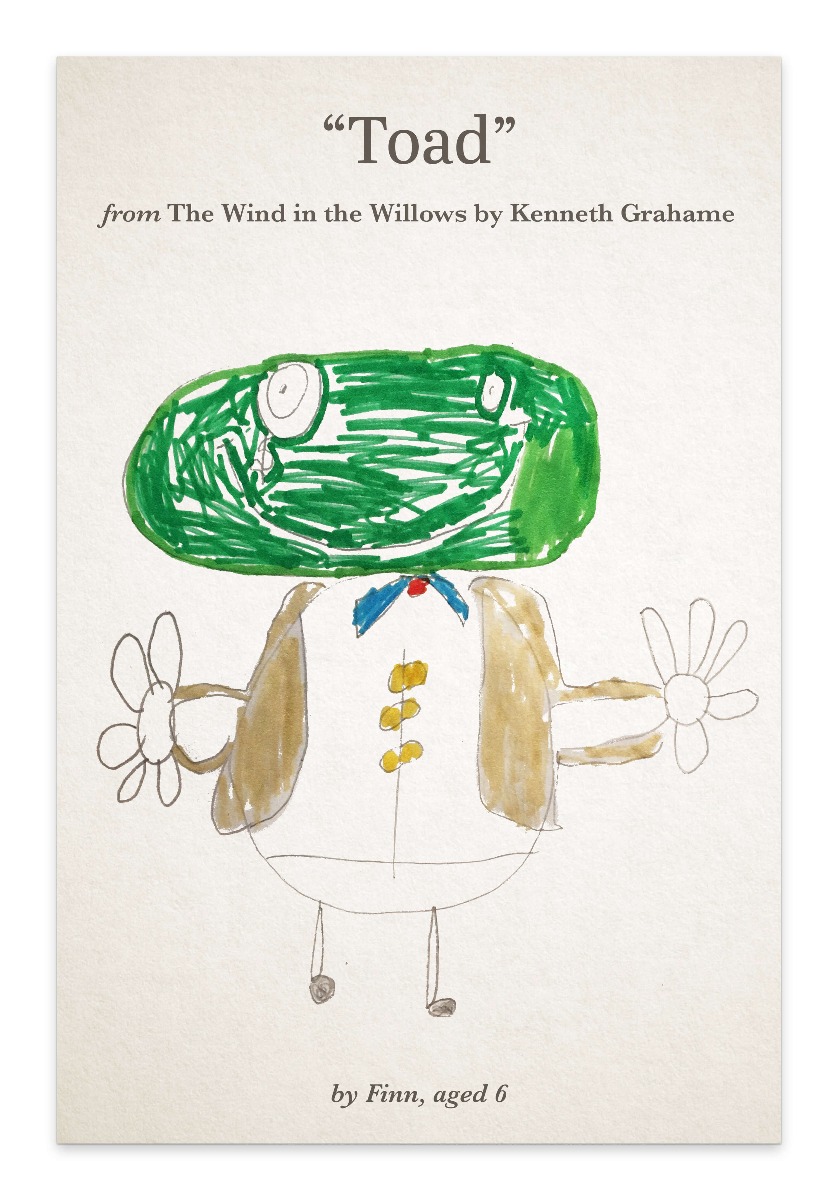 Mr Toad from "The Wind In The Willows" by Kenneth Grahame:

"Arrayed in goggles, cap, gaiters, and enormous overcoat, came swaggering down the steps, drawing on his gauntleted gloves.

So simple, so good-natured, and so affectionate. Perhaps he's not very clever— we can't all be geniuses; and it may be that he is both boastful and conceited. But he has got some great qualities."

If you’ve been inspired by some of these beautiful illustrations, please do send your own to pens@theonlinepencompany.com - and let us know if the artist knew which character they were drawing.

Ever thought of keeping a reading journal?

A lot of successful novels end up getting made into films, and then there’s a ready-made visual identity for each of the characters. But if you never watch the film, or one never comes out, all these subjective descriptions can give readers wildly different mental images.

If you’re trying to read more, remember more of what you read, or find an excuse to write or draw, you might consider keeping a reading journal.

You can start by choosing from our range of notebooks online, and making sure you have a writing instrument you love using, like a Waterman, Parker or Cross Pen. Start reading a novel and at the end of each chapter, fill a page in your journal with your thoughts, predictions, and how the story has made you feel.

Whenever a new character is introduced and their appearance is described, you might want to do a quick sketch - artistic talent not required! You could use a drawing pen for this, or even a mechanical pencil. We stock a big range of coloured pencil leads to help you get creative.