An Illustration in its simplest form, is a picture or drawing to help explain a piece of text, but in the world of art it gets much broader than that. With the increase in on screen film and tv, especially in cartoon format, illustration has seen a huge increae, and artists use illustration drawings to depict their favourite characters in new, and interesting ways. The same applies to characters in books, where illustrators will dpeict their own image of how they expect a character to appear, and then share them out over the wider internet and artist communities. Generally an illustrative drawing is constructed using block colours, with either marker pens, colouring pens, colouring pencils or fineliners. Below is a selection of pens that are great for illustration.

Broad gel ink Rollerball pens that are perfect for writing on coloured paper and card.

A fineliner pen great for making designs and graphic art.

This fibre pen comes in a variety of beautiful colours perfect for writing and sketching.

An extra-fine needlepoint rollerball pen, admired by both writers and illustrators.

A stylish needlepoint rollerball pen with a handy pen-loop on the cap.

Precise fineliners with a wide range of bright colours.

A great selection of acrylic paint markers perfect for beginners and professionals.

Popular broad fineliner pens that are great for colouring and writing.

Gloss paint markers perfect for the use on most materials, even dark and transparent surfaces.

Metallic markers that are ideal for coloured paper and card.

The flexibility of the brush pen ensures a smooth application ideal for decorating porcelain, glazed ceramic and heat-resistant glass

Calligraphy fibre pens create the most beautiful writing ideal for a range of materials.

Bold, Bullet-tipped marker pens ideal for a variety of creative projects, including painting, decorating and crafting. 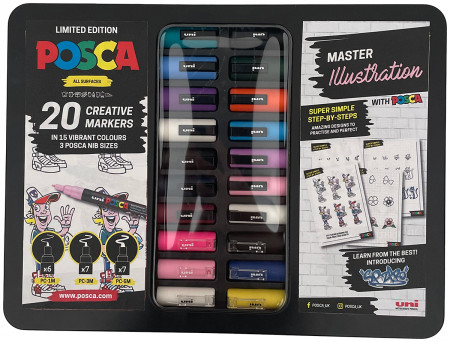 Powerful permanent markers which are great on dark surfaces.

Powerful permanent markers which can write on many surfaces.

A permanent marker with a large chisel tip.

A popular sketching pencil for artists, designers, engineers and more, available in a wide range of grades.

Practical textile marker with a round nib width of 2-3mm

Perfect for decorating and drawing on most light textiles like cotton, silk and linen